Chris More asked me to write something for the website. I don’t want to teach people how to suck eggs but what I thought I’d do was give a quick overview of how we set up the boat and then discuss what we believe is the main issues of how to get upwind ASAP.

Boat set up, the only thing we really concentrate on is to have the mast set up centrally and with a maximum rake. You should unscrew the forestay as far as you feel confident. In our case we unscrew until the end of the screws is flush with the inside of the body. If you leave it this far out it is important that you ensure that it can’t unwind. It helps if you never oil the screw but we also tape the whole thing up with gaffer tape. If it is really windy with big seas or bad chop for safety we may stick a couple of turns back on.

Increasingly we don’t touch our rig setting. We have a base setting (I don’t know what this is on the loos gauge) but we have 12 threads showing on the outers and 18 on inners. (if anyone is interested I will measure it next time the rig is up) We used this setting for the whole of the nationals which varied from drift to fully powered up and we didn’t feel there was a marked speed differential. The most alteration we would make is a couple of turns off both uppers and lowers in light winds, and wind on the uppers in heavy airs, if it’s really blowing you can put on as many as you feel safe with.

Jib car position. I don’t think this is as critical since the battens have been added. In our case we rarely move it from having 2 holes showing at the back. Possibly in very light winds or with an excessive sea condition compared to the wind we may push it forward one, and possibly when it’s blowing close to cancelling we might put it back one or two. Of course we tend to be a bit fat, the basic principle is if you are struggling put it back.

As regards main halyard, the sails shrink and if you use the shackle on the tack on anything but a brand new sail it will be way down from the black band. We pull it right up to the black band, tie the tack as tight around the mast as possible which holds the tack forward and can hold it down tight enough for light winds and the cunningham does the job as the wind increases.

Clew outhaul I don’t worry about maybe as much as I should, basically in light winds we have it eased a bit and once fully powered up fairly tight, when blowing we pull it on as hard as we can.

Cunningham , we don’t have it on at all in light winds, as we get powered up we take out the wrinkles, when we start to get over powered we just increasingly pull it on as it gets windier.

I think these are important but the real difference in getting upwind fast is balancing how you sail in response to the wind strength and sea conditions.

There are two methods of sailing a 707 upwind, which basically relate to mainsail leach tension. There are the twisters and the “tight leachers”. Both have their application dependent upon wind strength in conjunction with sea state.

The twist approach tends to keep the traveller higher to windward and the mainsheet eased producing an open leach. Jib leads would tend to be further forward and the sheet possibly slightly eased. This produces often a lower angle but higher pace (although lack of height is to some extent ameliorated by the improved pointing from speed) also it provides a very wide sweet spot which makes it easier to get over a sea. Hence this approach is good for all sea conditions in very light winds and useful as the sea state gets more confused in higher wind strengths.

The basic premise is that you sail with a tight leach and affect the power by playing the traveller. Jib leads tend to be further back and with a tighter sheet. This approach has a narrower sweet spot, and is therefore more difficult to get upwind in a sea. The tight leach produces a higher angle.

We prefer the tight leacher approach and believe the vmg is generally better, as long as the helmsman can still get the boat over the sea. So how we sail is with a tight leach unless sea state to wind strength preclude.

Even without a sea in very light winds you need to sail twisted to get the boat moving. So in very light wind the Jib is eased an inch or so, traveller upto windward and main eased so boom is in the centre line. As the wind strengthens we tighten the mainsheet letting the traveller down to keep boom centred, and tighten the jib. By the time you are fully powered up (everyone on the rail) the mainsheet is pulled on as hard as you can. As the wind builds and you need to depower drop the traveller down. When it gets so windy you run out of traveller, the vang should be pulled on as hard as you can and the mainsheet eased. The jib is so small a closed slot doesn’t seem to become an issue. If it’s really breezy you may want to ease the jib a little. (As an aside remember if you have the vang on tight upwind you will need to release it to bear away around the top mark.)

The greater the sea state the more difficult it is to sail like this, when I say sea state I don’t mean the size of the sea but the spacing/ confusion of the chop. Our first position is to sail with this method and twitch over the waves. If we slow due to me hitting a few waves, I ease the main a bit and put the bow down a little, if really bad maybe the jib as well, get speed up again and sheet back in and get twitching over the waves again. Sometimes the sea is constantly so difficult to get over you need to go to a more twisted approach. It i s not unusual that you may be able to sail one tack with a tight leach and have to sail more twisted on the other.

I’ve noticed with some of the fleet the helm seems to sit along way back with the crew spread evenly along the side, this not only increases pitching but drags the stern. In very light winds if anyone volunteers put a couple of crew down below with a little heel and weight well forward. Once on the rail the crew including the helmsman should be stacked as close together as possible with the bow just in. If at all possible the helm should do the mainsheet and get all the rest of the crew over the side.

I hope this helps, remember 9 times out of 10 if you are going slowly upwind it’s not because of your rig settings, nor because of the sails but that you are sailing the boat inappropriately for the wind strength and sea conditions and you need to change something. 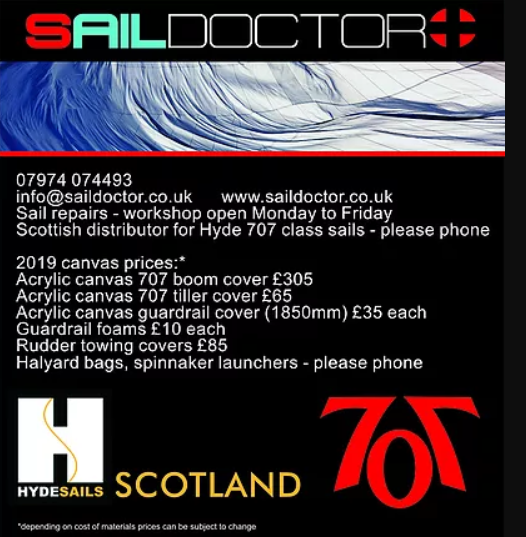